On Friday I had a very special delivery to my house. In a box marked fragile, the Postman delivered our caterpillars.

The five caterpillars are still very small but they seem a little bigger than yesterday. One of the caterpillars seems a lot smaller than the other four, we have called him Tiny.

They all seem to be getting a little bigger everyday, even Tiny. Today we can see some webs in the cup. Webbing is a good sign, Caterpillars continue to spin silk webs as they grow. In nature, the webbing protects the caterpillars from many dangers. Caterpillars use webbing to stick to their host plants, as the wind can easily blow them off the leaves; caterpillars use the silk to pull leaves around themselves to hide from predators that might like to eat them!

There is lots of webbing in the cup today, making it hard to get a good picture of our five furry friends. Did you know that caterpillars look like they have lots of tiny legs but they only have six true legs. These true legs have hooks on the ends and they use them to climb up the webbing, using it like a sort of ladder.

The caterpillars are really growing now, but not all at the same rate. This picture shows that Tiny is growing but is still really small and one of our furry friends is getting really big.

Can you see the tiny brown balls in the cup? These are called 'frass', or caterpillar poo!

There are also some bigger, black balls. Can you guess what they might be? I'll give you the answer tomorrow.

The caterpillars are getting really big now. You can now see their legs and they are beginning to have a spotty pattern along their back.

Did you have any ideas about what the little black balls might be? Here you go...

Not much change with our caterpillars today. They are moving lots and there is now lots of webbing, frass and moulted fur balls. Tiny is still much smaller than the others but is slowly growing and moving around the cup lots.

Did you know that before the caterpillars turn into their chrysalides they will grow more than 10 times there original size!

Tiny is growing lots now,  but still has a lot of catching up to do. The other are getting really big now.

Did you know that caterpillars breath through holes in its sides called spiracles. These are located on both sides of each segment of the caterpillars body. 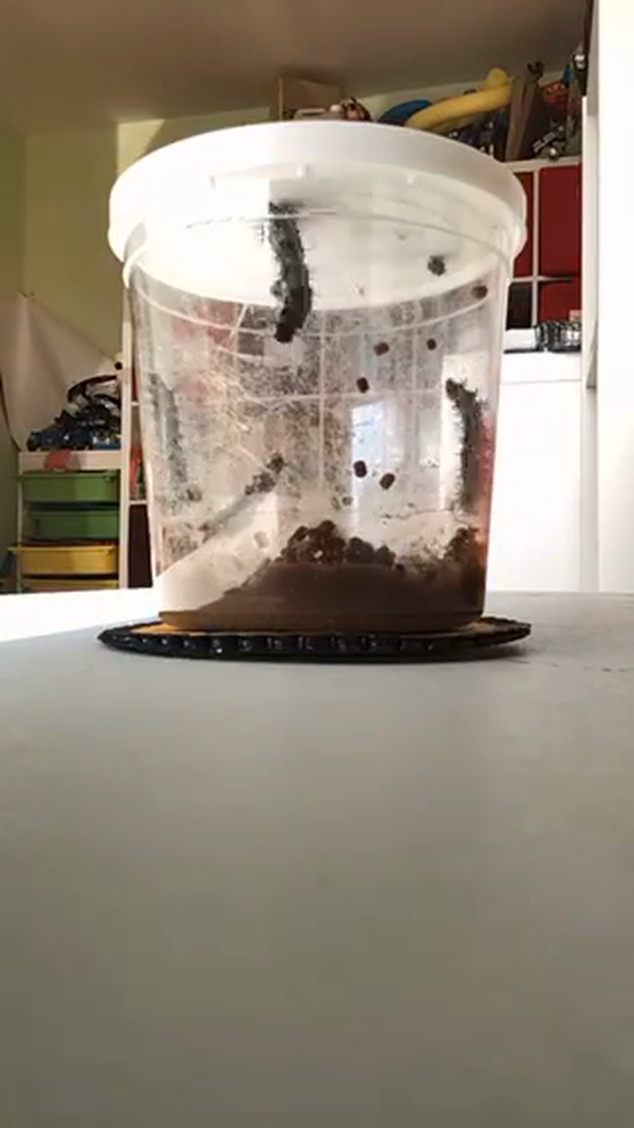 The caterpillars are still growing. They are very active and never stop crawling around the pot. Tiny is the fastest mover.

The caterpillars have been less active today, they have eaten lots of their food and its hard for them to move around the cup now because there is so much webbing, frass and moulted skin fur balls.

Caterpillars eat, spin silk and grow for approximately 7-12 days before changing into chrysalides.

When they have finished growing, the catepillars will climb to the top of the cup. Once there, they will hang from the paper in the lid in a 'j'shape. They will shed their exoskeleton one last time (five times in total) before they pupate (become chrysalides).

I really thought the caterpillars would begin to form their chrysalides today, they are very big, eating lots of food and keep crawling to the top of the cup. Maybe tomorrow will be the day.

Did you know 'Larva' is another name for 'caterpillar'. Larvae is plural.

Four of our caterpillars have been hanging in their 'j' position most of the day. Their transformation into their chrysalides will be happening very soon. I'm hoping to catch the process on video to show you all. Hopefully four of our furry friends will look very different tomorrow.Tiny will hopefully follow a few days later. 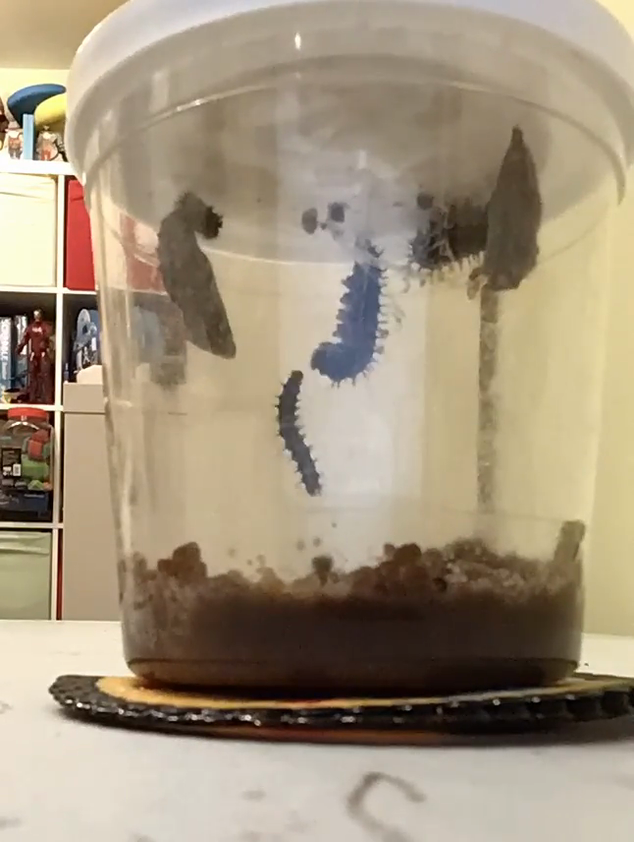 We finally have two chrysalids! I have caught the action on camera but it is very quick. How many do you think we will have tomorrow?

We have four chrysalides! Tiny has also been spending a lot of time at the top of the cup but I'm not sure if he is getting ready to pupate or if he is just wondering where his friends have gone?

During the first three days after becoming chrysalides they need to be kept very still as this time is very delicate. It takes a couple of days for them to harden before they can be moved from their cup. They may look like they are resting but an amazing transformation is taking place inside!

Not much change today. As the chrysalides harden the colour changes slightly. Can you see the shiny golden patches, it really shines in the light. I wonder what Tiny will be up to today?

Look who's not tiny anymore! Tiny is now huge, I'm sure he is bigger than the other four were before they turned to chrysalides.

Tiny is now a very big and very hungry caterpillar. He has done nothing but eat and grow this weekend.

All settled in their new home.
Not so Tiny anymore.
A close up of a chrysalis.

Today we moved the four chrysalids into their new home. I had to carefully take off the lid and place it into the holder inside the butterfly net. I had to carefully remove all the webbing and frass to make sure our butterflies do not get their wings caught when they emerge.

When I was moving them one came off the lid, I have moved him onto a folded piece of card and he should be fine.

When the chrysalids are moved they think they are under attack by birds or other creatures trying to eat them. To protect themselves they wriggle and shake to try to scare off anything that is trying to harm them.

Tiny is now massive but we are still waiting for him to pupate. He is still in the cup and he will be moved as soon as he is ready.

Watch how they wiggle and shake as they try to protect themselves. 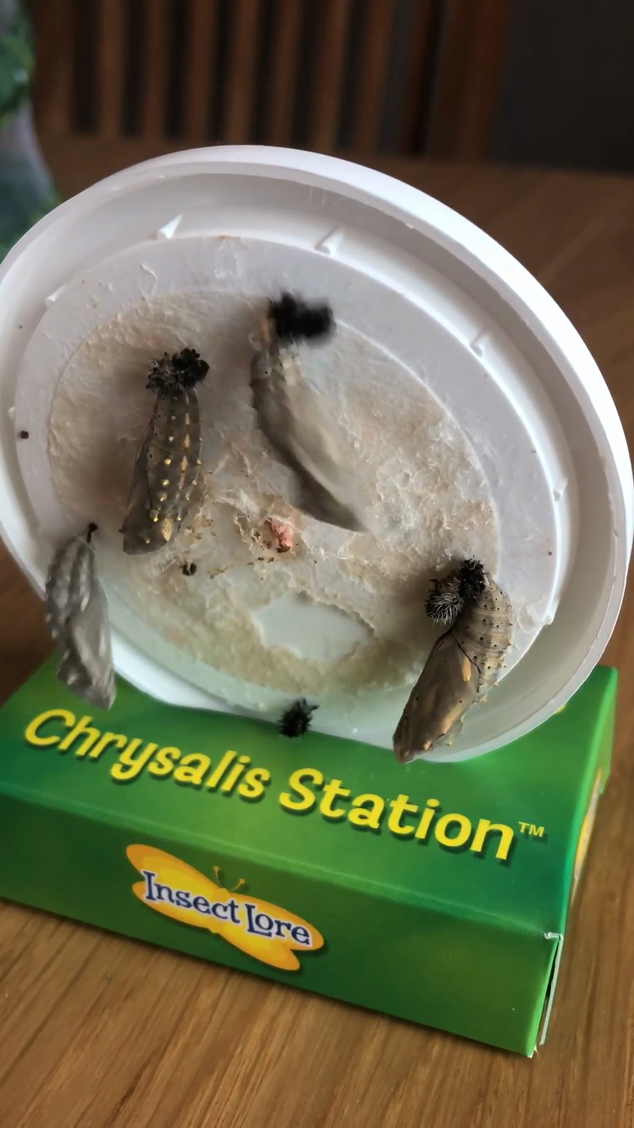 Apologies for my son at the end of this video 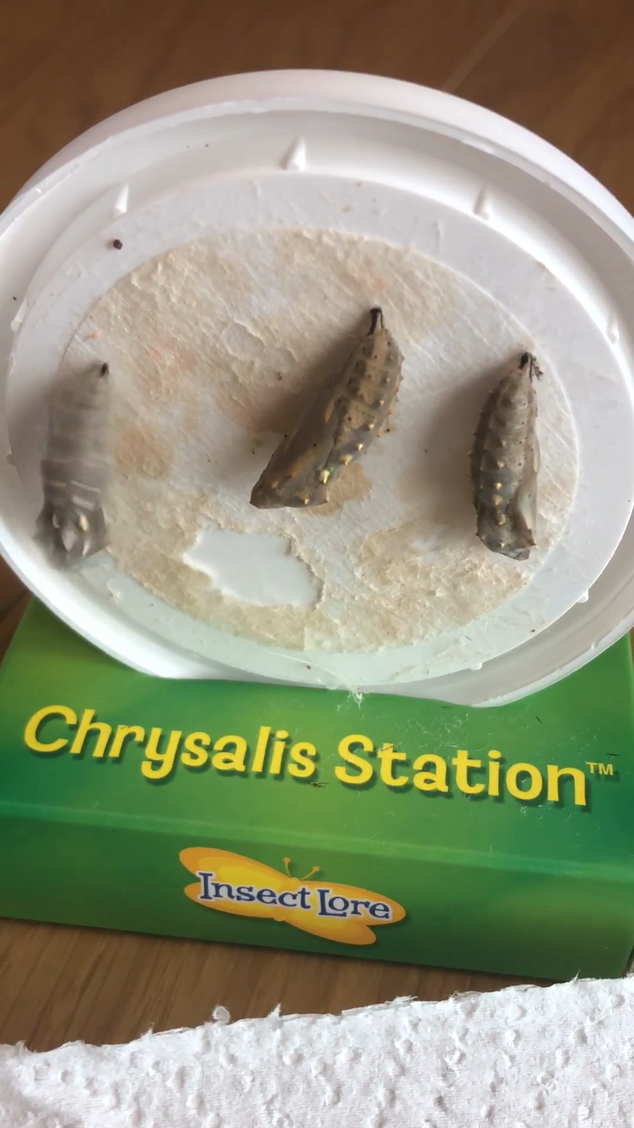 The chrysalides have been totally still all day today, they are in their net, safe from harm and no longer feel threatened.

Tiny is still growing lot's but has slowed down and isn't moving around much, we will have to watch him carefully over the next couple of days to see if he will also pupate into his chrysalis. 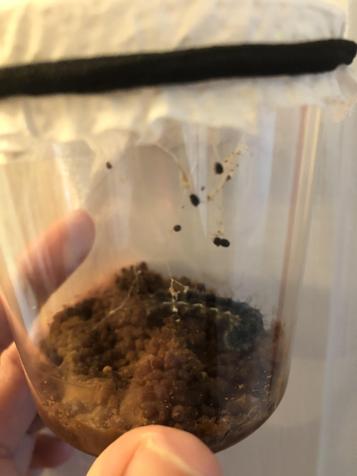 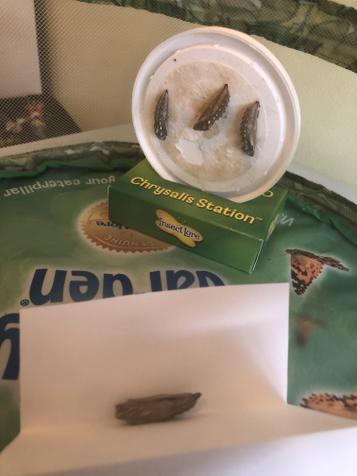 For 7 - 14 days, the chrysalides may look like they are resting peacefully, but an amazing transformation is taking place inside! The caterpillar parts inside each chrysalis are liquefying and re-arranging to become the cells, tissues and organs of a beautiful butterfly.

Tiny is in position and ready to pupate. It won't be long now until Tiny can join his friends and be in his chrysalis.

Finally Tiny is in his chrysalis. When he has had time to harden he can be moved into the net to be with the others.

When the chrysalides begin to darken we know that the butterflies are preparing to emerge. Sometimes you are able to see the outlines of their wings and bodies inside the chrysalides. 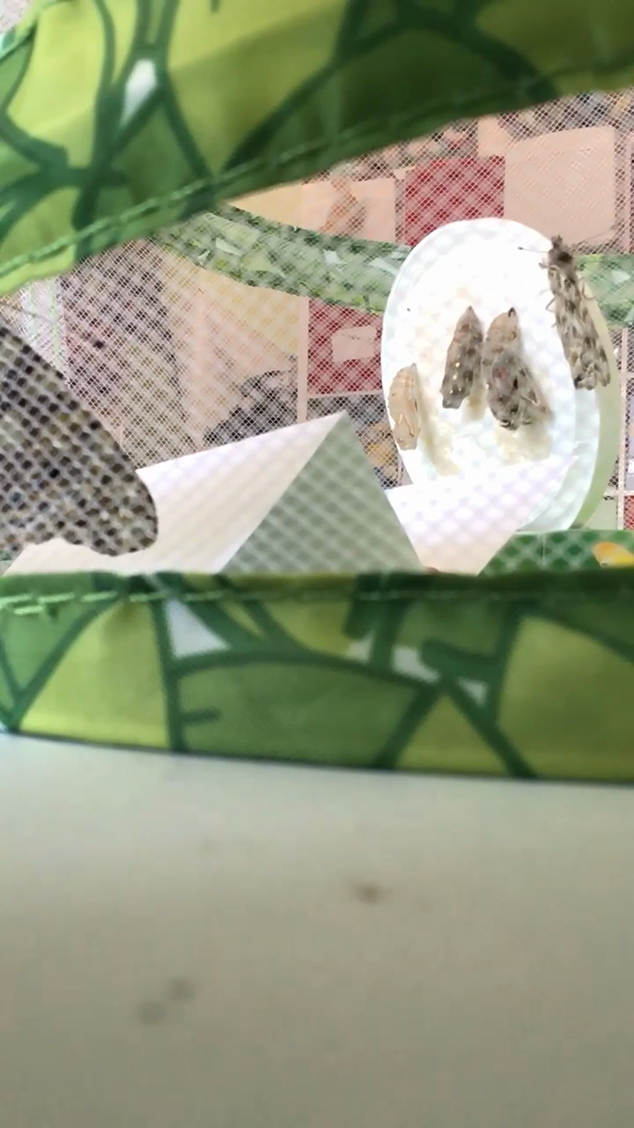 Today three of the butterflies emerged from their chrysalides. I was so pleased that I managed to catch one of them on film.

When a butterfly is ready to emerge, it takes in air through tiny spiracles (tiny holes) in the chrysalis. This added intake of air pressure helps the butterfly split the chrysalis open. Once the butterfly has emerged it takes take to stretch and dry its crumpled wings.

All four butterflies have now emerged. We have given them fruit and flowers so that they can rest and feed.

Tiny has now been moved from the cup and is safely in the butterfly net with the other butterflies.

You might wonder about the small red spots you can see on the stand. This red liquid is not blood, it is meconium and is a normal part of the process.

While the butterfly is stretching and hardening its wings, it expels drops of red meconium from its abdomen. It is often mistaken for blood, but it isn't blood at all. Instead, it is leftover waste material stored in the butterflies abdomen not needed to complete metamorphosis. This is red due to the colouring of the butterfly. The meconium is ivory for a white silkmoth.

Our butterflies are enjoying themselves today. They have certainly been hungry. They have been sipping sugared water from the kitchen roll and from the flowers we have put into their habitat.

Butterflies enjoy an all-liquid diet. While they mainly feed on nectar from flowers, butterflies also occasionally sip from mud puddles rich in minerals and salts.

Our butterflies are getting really friendly now. Today one of them even fed through the net, from our finger. We put some of the sugar water (nectar) onto our finger and the butterfly poked his tongue (proboscis) through the net to drink the feed.

The butterflies have loved the dandelions we have given them today. On this picture you can just see its tongue (proboscis) drinking from the flower. The butterfly's mouth, or proboscis, functions like a straw to sip the nutritious liquids. When not unfurled to drink, the proboscic stays curled up beneath the butterfly's head.

The butterflies haven't moved too much today, I think it's a bit cold for them. They have been feeding lots from the dandelions though. No movement from Tiny yet.

A lot more movement from our friends today, they have been enjoying a bit more sunshine. I'm hoping Tiny emerges from his chrysalis soon as his friends are getting ready to be released and it would be lovely to release them all together.

Our butterflies have enjoyed their last day in their butterfly net today. They have been flying around and spreading their wings. We are going to release them tomorrow when it is nice and warm. Tiny's chrysalis has turned a little darker today so hopefully he will emerge in time to be released with all of his friends tomorrow.

The butterflies were very friendly.
Each one climbed onto our hand before flying away.
They were in no hurry to fly away from us.
A damaged wing didn't stop this butterfly.
Yay! Tiny joined the fun.
Here is Tiny resting on a bush.

When we woke up this morning and saw that Tiny has emerged from his chrysalis we knew today was the day to release the butterflies. The butterflies were all very excited when we took the net outside and they began to fly around lots. When we opened the net we expected them to fly straight away but each butterfly landed onto our hand first.

We were a little worried about one of the butterflies because his wing looked a little damaged but he flew away without any problems. Tiny, as always, was a little slower than the others. He seemed to be struggling to fly so after a while we placed him on a bush so that he could have a rest. After a while he flew away too.

It has been great fun watching the caterpillars journey into butterflies. Today it was a little sad to say "Goodbye" but it was lovely to see them so happy and free.